Ever wonder how that stock image is created? The Stock Photo Guy, John Lund shares a war story:

“As long as he wants” was her answer. That turned out to be about 45 minutes…or slightly more than $100.00 a minute!  That investment in a stock photo shoot turned out to be a good one. The images from that shoot have earned that amount ten- times over in the seven years since I created them.

Yet money is not the primary criteria I would choose to determine the success of a stock photo. Rather, for me, a successful stock photo image is one that solves a common visual problem in a compelling way (i.e. showing the concept of risk in the case of this lion trainer image). If an image accomplishes that, the money will take care of itself. By defining success in that manner I can keep my focus on creating the best possible imagery; and it is in providing such a body of work that my career fulfills both my creative and financial needs.

In addition to filling the pressing needs of the advertising, design and editorial professionals, I want my stock photos to have a long shelf life. Which brings me back to the lion image. The goal was to create a photograph that deals with issues around risk. And what could be riskier than putting your head in a lion’s mouth? I did a search on the Internet, including various stock agency sites, looking for actual images of that iconic picture we all have in our minds, that picture of a circus animal trainer with his head in a lions’ mouth. I couldn’t find one! I guess it doesn’t actually exist outside of the cartoon world.

Now don’t get me wrong…you don’t have to spend $5,000.00 renting a lion to create successful stock photos. But this image illustrates the importance of a strong idea, a clear concept, a timeless “iconic” image, and an uncommon visual. In fact, a good thing to remember in creating stock imagery is the strength of the uncommon visual in illustrating the common problem.

Before our shoot the lion trainers (there were three of them) gave us the ground rules for having a lion in our studio. First, get rid of the sand bags. The lion might think of them as rodents and might have to kill us to keep us from his prey. They further warned us not to “stray from the pack”, not to pick-up any of the chunks of meat that might get swatted our way (they went through five pounds of beef chunks as “rewards”), and to avoid quick movements. Oh yes, and cover anything we didn’t want “marked” with a tarp. Turns out lions can “spray” about fifteen feet.

When the lion emerged from his trailer there was a palpable sense of his power and a new appreciation for the the term “King of Beasts”. The shoot went well. The trainer’s coaxed him into a standing position on his hind legs with the chunks of beef. We shot him seated on a circus pedestal, and in various standing and walking poses. We tried to get him to yawn (I wanted his mouth as open as possible for my lion trainer shot) but had to settle for chewing. Eventually the big guy started edging closer and closer to my shooting position. His curiosity was getting a little too intense and the trainers decided we were done. I didn’t get everything I wanted, but I got enough!

After shooting the lion I had my assistant photograph me in a circus ringmaster’s costume. We photographed a purple hula-hoop with white tape wrapped around it for the center ring of a three-ring circus. We filled it with garlic powder to look like the sawdust you’d find in circus rings.  I photographed some of my friends out of focus to use for the crowd…then spent about a day and a half creating the image with Photoshop.  Other images from that shoot include a lion as “King of Beasts”, a lion lying next to a senior woman knitting, and a lion in a waiting room. All-in-all I now have a dozen quite successful lion stock photos, selling hundreds of times and recouping expenses 10X plus. 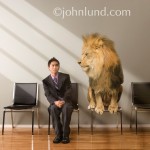 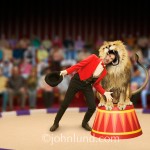 Skilled and seasoned photographer John Lund can be found blogging here when not moonlighting at the circus: